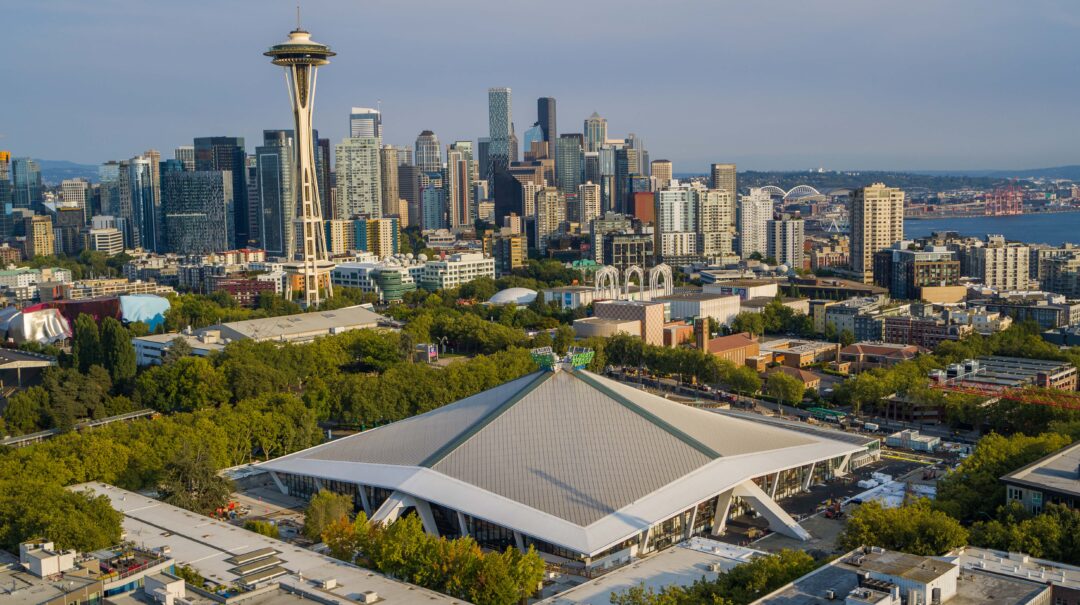 From the moment Brian and I stepped inside Seattle’s exciting new Climate Pledge Arena for a concert by The Eagles early this month, it was crystal clear that the city’s newest sports and concert venue offers a remarkable experience, no matter what you’re there to see.

Amazon’s Jeff Bezos is behind the unusual name. He paid $300 million for naming rights, and chose the moniker based on the facility’s mission to become the world’s first net-zero carbon certified arena. The arena runs solely on renewable energy (onsite and off), with a rooftop solar panel providing some of the energy needed to operate.

This extraordinary $1.15 billion architectural marvel, home to the city’s exciting new NHL team, the Seattle Kraken, and WNBA’s Seattle Storm, is a feather in the cap of Seattle’s roster of top-league sports stadiums. The stadium was rebuilt by the renowned Oak View Group, headed by Tim Leiweke and Irving Azoff, who were fanatical about getting every little detail correct.

It’s easily the most state-of-the-art entertainment venue in the U.S. The experience starts as you approach, with the iconic swoopy shape of the original Seattle 1962 World’s Fair Coliseum roof that was preserved in the construction process. As a designated historic landmark, the roof had to be retained, but keeping it made for extremely challenging logistics.

Brian and I saw this for ourselves when we did a walk-by a year and a half ago and saw the 44-million-pound roof seemingly flying in the air held up by shoring that looked impossibly spindly while a giant hole was being burrowed deep into the earth beneath it. The process of keeping the roof in place while digging beneath it had never been done before on this scale. Some 680,000 cubic feet of dirt was excavated in the process. Since it’s impossible to imagine a quantity that large I looked it up, and this totals more than 42,000 dump truck loads!

In order to keep the roof (and keep it in the exact same position) yet double the arena space, the new structure needed to be more vertical. So instead of entering at street level and then going up to seats, the way most stadiums are built, with the new arena you enter at grade level and the arena steps down. There are 17,000 seats, with a compact layout that makes for seriously steep seating. The person in front of you is about at your knee level—which makes for great viewing. This brings all the seats closer to the action and makes any concert or game here feel like an intimate experience.

Stepping Inside the New Arena

Entering at the main, South Entrance, we found ourselves in the Alaska Airlines Atrium, with the entire space bathed in natural light from skylights and windows. There’s a fantastic view of the Space Needle from this vantage point. When we walked over to a railing, we discovered that we were on a mezzanine overlooking the base of the atrium, a floor below. Directly opposite, a vast digital wall depicts a waterfall falling through a Northwest forest seemingly alive with breezes. Escalators take you down to the base of the waterfall, at the level of the main concourse. The entire effect is impressively dramatic.

After riding the escalator down, we immediately came across the Living Wall, a clever cliffside of greenery growing out of fabric-like pockets made from recycled water bottles. The intense green of the wall is made up of 27 different plant species, mostly vibrant green, interspersed with delicate purple blossoms. Circular video “windows” with digital signage here tell the story of all the ways the arena is working to help the environment. The stylish setting is clearly meant as a conversation point to get people talking about the value of the Northwest’s natural environment, and it’s a natural Instagram backdrop. We happily obliged.

This level is where you find the eateries. In a setting where you would expect to see national chains, it’s all about local foods. Local restaurants with a presence here include Lil Woody’s burger and shakes, Ethan Stowell’s Ballard Pizza Company, Din Tai Fung dumpling house, Elliot’s Oyster House and Metropolitan Grill, plus many others.

While much of the fare is what you would expect at a sports-and-entertainment are—pizza, burgers and dogs—these are not just any fast-food items. The arena has made a pledge with its partners to try to source 75 percent of the products from a 300-mile radius. Even the ketchup and mustard are sourced from a Portland-based business within this radius. In addition, plant-based alternatives are on the menu at a number of the stands (Seattle Kraken’s official burger is the Impossible burger). We learned that any beef sold at the stadium must be from grass-fed animals; all eggs are from cage-free chickens; there are no nitrates, antibiotics or hormones in any of the meat products; all cooking oil is hearty-healthy; and as much as possible, the produce is organic.

Beyond the burgers, a number of less-common food options stand out, including duck confit; the Climate Pledge Arena Bowl, with organic arugula, local greens and roasted berries with a thyme-lemon vinaigrette; and hasselback potatoes topped with local Beecher’s cheese—and bacon Pop Rocks(!).

It was fun to get our first close-up look at an Amazon Go store—here called Amazon Just Walk Out. Guests insert a credit card at the entrance and take whatever they want, including hot foods like Shaquille O’Neal’s Big Chicken, then just walk out.

It was time to head to our seats, in the last section to the left of the stage. Brian is highly practiced at ferreting out the best seats. Beginning with every concert he could get into in the mid ‘70s to a life of professional rock n roll while living in Los Angeles for 17 years, Brian estimates he’s been to at least 500 concerts.

From our side-view vantage point we were impressed with the full, rich sound made possible by high-tech sound engineering, including ceiling sound baffles. Visually, we were able to absorb every bit of the action from this perch that was close enough to see facial expressions.

Watching the surprised, joyful expressions of our fellow concertgoers as they perused digital signage about climate issues, snapped selfies at the Living Wall and took in the concert in this magnificent new setting was equally satisfying. It’s clear that Climate Pledge Arena is a serious, and absolutely delightful, upgrade to the fabric of Seattle’s music and sports offerings.